Best skate city in the world? | GET LOST: Barcelona 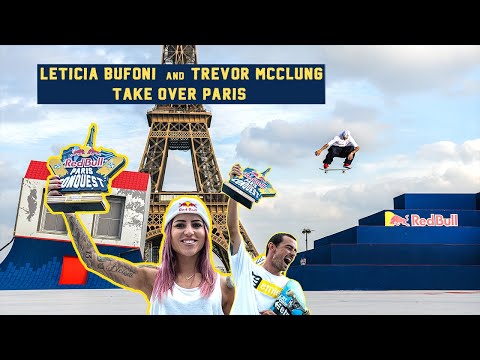 Congratulations to Trevor McClung and Leticia Bufoni for being crowned the king and queen of Paris respectively, but a widening of the lens will show a superb event with a strong local showing and a raucous throng of a crowd who clearly had their favorites and let them know who they were.

Certainly high among those was TJ Rogers, who has made himself no end of new friends in the city over the last few days and delivered a clinic in buttery ledge tech and showcased what is undeniably the best switch frontside 360 ollie in the game. His consistency and trick bag were enough for fourth place but could have placed him higher had he not been drawn in the semi’s against Aurelien Giraud who would have won had he not broken three boards with that stupendous power of his, meaning he effectively skated the semi-finals and finals on several borrowed boards. He would be wise to bring a quiver of identical set-ups going forward. Nonetheless, he remarkably managed to power his way to second with a repertoire of big block hammers, transition wonders and a hardlflip late kickflip unseen outside of Youtube and in the wild. The man he beat into third was crowd favourite Vincent Milou who has seemingly become the most popular skater in France over the last year. He also snapped a board against TJ Rogers in the run-off for third, but TJ showed a lot of class by not trying to seize the advantage while Vincent sorted out a new board against the buzzer. By contrast Trevor McClung managed to hold onto enough moves like a switch backside 360 down the Bercy 5 block without needing timeouts and held on for first place.

If pole position was closely contested for the men’s contest, it was less so for the women’s. Leticia Bufoni demonstrated some of the strength in depth that marks out her talent by powering through to first place mixing the ability to go big with a consistency that is truly remarkable. Unfortunately, Leticia’s scheduled final rival Aori Nishimura had to withdraw from competing after an ankle injury with her last trick of the semi-final having already secured a guaranteed second place, and so a spontaneous three-way skate-off was held to decide the rest of the final four positions.

This saw Leticia roll out against both the impressive and effervescent local Charlotte Hym who rode the crowd’s energy to an excellent third place and Argentina’s Eugenia Ginepro who used her transition skills to solid effect on the melting house and wave spots particularly and took a solid fourth place on what was a terrific platform for where the women’s event scene is headed in terms of calibre and skill level.

Many thanks to Flo Marfaing, Jeremy Grynblat, Greg Poissonnier, Ben Powell, Etnies and all our friends in Paris for helping make this unique event go with the bang it surely did!

Why is this here?

IS ZUMIEZ A SKATESHOP?

Hide Your Girl From Him!

Why is this here?